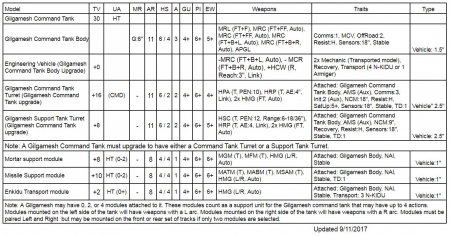 Things to note are the HSC on the support turret getting a range boost, the AMS trait getting the Aux trait, the addition to stable to the turrets, and notes about how the modules must be attached. The option to remove two rotary cannons in favor of the ability to do repairs is also significant, especially if you have an Armiger Duelist/Ace you need to keep in the fight.
And a special preview image of the Tank from the viewpoint of a Hunter about to get run over!

We’re looking forward to previewing more images of the Gilgamesh soon. Keep your sensors active and join the discussion on the forum.